At Franciscan Health, an Analytics-Driven Initiative is Improving Patient Care and Reducing Costs 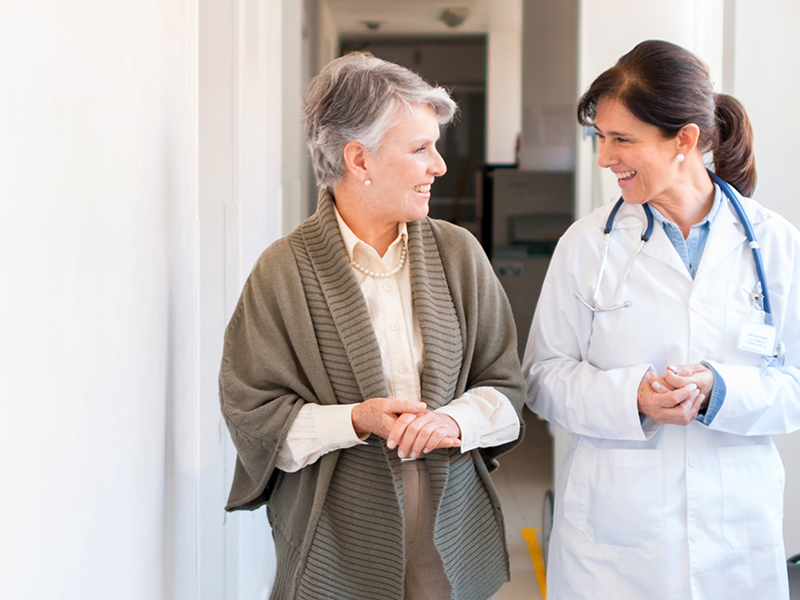 Many patient care organizations are operationally focused on improving clinical and financial performance to succeed in a value­ based environment. One of the primary ways to drive performance improvement is to leverage data and analytics to address care variations in clinical practice.

The health system determined a $655,000 gap in care costs between its best- and average-performing physicians

Franciscan Health, a 14-hospital health system based in Mishawaka, Indiana and serving patients in Indiana, Illinois and Michigan, is driving results in this area by utilizing a technology solution to analyze the system's rich data to assess performances and, ultimately, reduce costs. Back in late 2012, Franciscan Health executive leaders began a system-wide effort to address clinical quality improvement.

"The leadership really looked at where the direction is headed as far as fee-for-value and trying to identify ways to tackle care variation and clinical quality improvement initiatives, and they wanted it to be an effort across the system," David Kim, director of strategic and decision support at Franciscan Alliance, says. "They created what we call clinical operations groups, and they are all physician-led committees that are headed by the chief medical officer and/or the vice presidents of medical affairs (VPMAs) for each of the facilities and regions that we have."

The first key step to this work was top leadership prioritizing the effort, drafting guidance and getting the right people to the table, Kim says. In addition to being physician-led, the clinical operations groups also are multidisciplinary teams, including leaders from nursing, pharmacy, case management and social work, "across the whole patient care continuum," Kim says. "We were trying to get major departments together to tackle some of the areas, whether it was utilization, patient flow, performance and quality measurement. It's now been in existence for six or seven years, and it's been a concerted effort to have everybody focused on an on-going basis."

"The idea was to tackle care variation, looking at resource utilization, as well as looking at performance improvement for length of stay, readmissions and mortality rates and some of the quality metrics that we get monitored and measured on by CMS (the Centers for Medicare & Medicaid Services) and on pay-for-performance areas," Kim says.

He continues, "Each region and facility was given some flexibility, as to challenges specific to them, so, in other words, they would prioritize different conditions, but across the board, we started off with targeted conditions like heart failure, pneumonia and sepsis. Those were common challenges across all the facilities, so those were some of the early wins of trying to build some momentum by targeting a few conditions rather than chew off too much at once." He adds, "That started to have a halo effect, improving one condition, especially heart failure, for example, effects a large volume; it has a halo effect, in terms of improving other conditions."

Kim notes that the Axiom Clinical Analytics includes clinical performance benchmarks at the national, state and hospital level. "The solution was very flexible in terms of giving us an ability to target and customize and provide 'apples-to-apples' analysis," he says.

"Their system helps us to group, to customize and profile; having that flexibility was one of the key components in trying to drill into some of these high-level opportunities. Choosing the right content as well as the analytic engine to drill down was really paramount in our process."

Axiom Clinical Analytics allowed project leaders to integrate data sources, perform custom analytics and access a large library of  benchmarks. The IT team was able to leverage the health system's Epic electronic health record (EHR) to mine data for detailed internal process metrics. "In order to put that into perspective, it was important to have another engine and comparison point with benchmarks," Kim says. "We can compare ourselves historically, that's one thing. We may pat ourselves on the back if we improve by half a day or so, but if we're still a day off the benchmark that lays the groundwork to push ourselves a little bit further and not just settle with historical improvement."

He continues, "Risk adjustments are a part of that too, especially when you work with physicians; they always come up with explanations, such as my patients are sicker or I have a more challenging population to work with. So, the analytic tool has done some risk adjustment for us. So, we know that it's apples to apples that we're comparing heart failures at various levels of acuity, pneumonia patients at various levels of acuity, and knowing that patients are very different, we had to treat those things condition by condition, rather than trying to roll them up and then have some challenges with identifying where some of the opportunities are."

From Data Analysis to Actionable Insights

The aim of this “apples-to-apples” analysis was to produce actionable data that could be used to eliminate or decrease performance gaps. As a result of this analytics work, the data helped to identify high-performing physicians, or what the clinical operations groups refer to as “best performers,” and then also revealed dramatic variances between the health system’s best-performing and average physicians.

“These ‘best performers’ were statistically better than the benchmark in length of stay, statistically better than the benchmark in mortality rate, better than our system average for readmissions; that’s an area we didn’t have national benchmarks for, so we used a system average, for example. And, then, after grouping them that way, we then analyzed their cost per patient and realized there were some significant differences in terms of the costs as well,” Kim says.

Upon an even deeper analysis, the team found that when accounting for reduced respiratory treatments, fewer lab tests and shorter time spent in an intensive telemetry bed across 4,996 patient cases for two years, the best-performing physician’s total cost of care was $654,609 lower than average-performing physicians.

Franciscan Health has since leveraged these findings to help its lower-performing physicians bring their practice in-line with their best-performing colleagues, with the goal of not only improving patient care but also reducing overall costs.

“By segmenting performance and creating tiers of performance by our attending physician groups, we were able to find not just the best performers, but also identify the outliers, and that’s equally impactful because you can then approach those groups of physicians and tackle the ‘why.’ What’s causing them to be significantly worse in each of these areas? And then try to address that aggressively as you would try to identify examples of who you want to emulate and figure out best practices among best performers,” Kim says.

Data and analytics played a vital role in bringing these key insights to light so that action could be taken. “Physicians by nature are competitive, so when they know they are below average, or an outlier, that does grab their attention. Once the physicians understand the information and know that it has been risk-adjusted, verified and validated, then they are more eager to engage on, where should I improve?” And, he adds, “Nine times out of 10 they know they can improve, they just need some data to back up that perception.”

Project leaders also recognized the importance of targeting frontline caregivers in this performance improvement work. New positions, called physician advisors, were created, and these positions function as the “right-hand men and women” for the chief medical officers or VPMAs. Physician advisors review the care variation data and consult with the “outliers” to focus on improvement.

The clinical operations groups also created interdisciplinary care coordination rounds (ICCRs), or daily rounding teams. “We have multi-disciplinary frontline staffing rounding on patients, identifying those that were beyond the benchmark in terms of expected length of stay, so we put in a lot of additional practice, if you will, into hard-wiring some more preventative work. The aim was to tackle the issues as they come rather than continually look at these retrospectively. All of that, along with better engagement with the physician advisor position, all helped to take the data and translate it into some meaningful results and response,” Kim says.

Because of this data-driven performance improvement initiative, Franciscan Health has realized $25 million in cost savings, since 2012, as a result of a reduction in length of stay and utilization. “For example, we reduced the use of red blood cells, as a result of changing protocols, verifications and number of units being implemented so that we reduced a lot of waste and unnecessary transfusion of units of blood,” Kim says. The clinical performance improvements also helped to reduce hospital stays, saving more than 25,000 risk-adjusted days over the past five years, which drove the bulk of the cost savings.

Kim notes that while technology is foundational to this work, getting the right stakeholders to the table to help drive compliance and standardization is vital for success.

“As a data person, it’s important to have strong content, strong engines to help you analyze, risk adjust and drill into the data so you can dispel any anecdotes or confirm anecdotes. To me, it’s an iterative process, starting with the overall high-level metrics and getting feedback from all the stakeholders, nursing, physicians, clinical departments and support staff, to help us identify opportunities to drill into them. You don’t just want analysts in a back room crunching numbers, but having data being presented and having them better engaged in talking about data and why that drives change, in terms of what you measure is what you can change. I think all that became very tangible for us when we created these groups so that they review the information and better understand how to interpret and how to drill down into those opportunities,” he says.

While these efforts have driven significant results so far, the performance improvement work continues, Kim says. “We’re still working on improving and hard wiring changes and processes. Sometimes it takes another system push to reinvigorate efforts. We’re doing the same thing now with identifying new benchmarks and really trying to transform some of the processes that we have today.”

He adds, “It’s always a back and forth in terms of identifying new benchmarks, knowing that, nationally, everybody improves on length of stay and readmissions. Even though we may improve, we know it’s a moving target. Many penalties are based on a curve; if you’re in the bottom quartile, you have to work twice as hard to get out of that area since everybody is trying to improve in the same initiative.”

Moving forward, Franciscan Health leaders are focused on using to data to shift from retrospective analysis to real-time care practice, he says. “A buzzword I hear now, and we certainly use it too, is predictive analytics, being able to better manage populations and using data to give us indicators as to, is this patient highly likely to be readmitted?”

“To me, that takes a lot of integration in the future,” he adds, “and that’s an area that we are constantly striving for, that integration of data, both for retrospective as well as predictive analytics. Retrospectively, we’re still connecting the dots on the cost of a complication, the cost of worsening performance, and linking also to patient satisfaction. That’s a key component that a lot of people are realizing—that highly satisfied patients typically are the ones that are hitting those benchmarks as well. Being able to link all of those areas and understand the correlations of each is a continued exploration for us,” he says.

This article was originally published in June 2018 by Healthcare Informatics. Read the original article here: https://www.healthcare-informatics.com/article/analytics/franciscan-health-analytics-driven-initiative-improving-patient-care-and-reducing