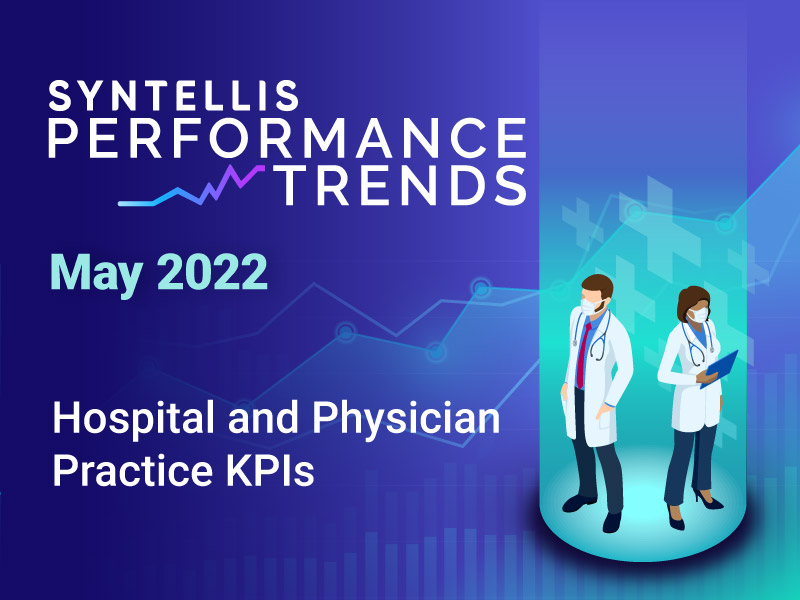 Meanwhile, a narrowing gap between hourly pay for employed and contract registered nurses (RNs) suggests a shift in hospitals’ approach to workforce shortages. Hourly pay rates for contract RNs has rapidly declined since February while pay for employed RNs has steadily increased, indicating a higher focus on recruitment and retention of employed labor over reliance on contracted labor.

Higher expenses and weak volumes contributed to year-over-year margin declines for the nation’s hospitals and health systems for a fourth consecutive month following the Omicron surge. Labor Expense per Adjusted Discharge continued to see the biggest year-over-year increases compared to other expense metrics due to the ongoing pressures of workforce shortages. Performance remained down across most key performance metrics compared to 2021 levels, but hospitals showed gains relative to lows seen in the early months of the pandemic in 2020.

For physicians, expense increases pushed the level of investment needed to support physician practices above 2020 and 2021 levels. Physician productivity also continued to rise, indicating an increase in patient demand three months after the Omicron surge.

Rapid declines in contract RN pay combined with progressive increases in employed RN pay suggest a shift in healthcare providers’ approach to nationwide workforce shortages, as they focus their efforts on recruitment and retention rather than reliance on contracted labor.

Hospitals continued to see widening gaps in year-over-year growth of per-unit expenses versus per-unit revenues for key departments. The trend reflects increasingly unsustainable margin conditions as healthcare providers contend with the pressures of nationwide workforce shortages, inflation, and supply chain issues. Urgent care and ED volumes increased year-over-year, but the pace of growth was down compared to the previous month despite an uptick in COVID-19 cases, reflecting the milder nature of the latest Omicron variant.

Disparities in pay between employed and contract RNs continued to ease in April following dramatic spikes in contract nursing pay in January and February driven by patient care labor demands during the Omicron surge. The median hourly rate for contract RNs was $58.97 in April, down -14% year-over-year. The median hourly rate for employed RNs was $52.60 for the month, up 17% compared to April 2021.

While the narrowing gap in pay for contract versus employed RNs indicates an easing in COVID-19 staffing demands, it also suggests a shift in healthcare providers’ approach to nationwide workforce shortages. Recruitment and retention are increasingly the focus as providers reduce pay for contracted labor in favor of raising rates for employed staff members.

To further illustrate the gap between revenues and expenses, this graph shows trends in Cath Lab labor and non-labor expenses, revenues, and procedures using April 2021 levels as a baseline. The data show an inverse relationship between procedures and labor, with Labor Expense per Procedure increasing as actual Procedures decrease and vice versa. Revenues — measured as Net Patient Service Revenue (NPSR) per Procedure — recovered somewhat with more procedures in March and April compared to prior months, but disparities in revenues and expenses remain significantly higher than in 2021.

The reduced rate of growth in ED and urgent care volumes came despite an uptick in total COVID-19 cases — which rose 27% from about 945,000 in March to 1.2 million in April — reflecting the milder nature of the most recent Omicron variant.

Hospitals and health systems nationwide continued to see mixed results in April, as expense increases persisted, volumes remained weak, and operating margins dropped year-over-year for a fourth consecutive month following the Omicron surge. While performance was down across most metrics compared to 2021 levels, hospitals showed gains relative to lows seen in the early months of the pandemic in 2020.

The median hospital Operating Margin decreased -77.9% year-over-year in April but was up 88.1% compared to April 2020, when hospitals saw volumes plummet with nationwide shutdowns and halting of nonurgent procedures. Per-patient expenses followed a similar pattern, with Total Expense, Labor Expense, and Non-Labor Expense per Adjusted Discharge all up versus April 2021 but down from the second month of the pandemic in 2020.

Labor continued to see the biggest year-over-year increases compared to other expense metrics due to the ongoing pressures of nationwide workforce shortages. April 2022 financial KPIs for U.S. hospitals and health systems compared to April 2021 include:

Median Operating Earnings Before Interest, Taxes, Depreciation, and Amortization (EBITDA) Margin was down -56.1% year-over-year but jumped 103.9% versus April 2020, without CARES. With CARES, the metric was down -51.5% compared to April 2021 but up 76.5% versus April 2020. Margins declined between -51% and -62% year-over-year across all regions, with hospitals in the Great Plains having the biggest decrease.

Expenses Remain on the Rise

Despite poor performance year-over-year, volumes increased across most metrics versus lows seen during the second month of the pandemic. Compared to April 2020, Adjusted Discharges jumped 64.3%, Adjusted Patient Days rose 62.2%, and ED Visits increased 58%. Not surprisingly, Operating Room Minutes had the biggest increase at 156.8% versus April 2020, when many hospitals halted nonurgent procedures at the onset of the pandemic.

Physician practices continued to contend with rising expenses and increased patient demand in April. The level of investment needed to support physician practices remained on an upward trajectory, once again surpassing both 2021 and 2020 levels.

The top five physician financial and operational KPIs for April annualized versus 2021 are:

The median Investment per Physician FTE increased compared to 2021 and 2020 across most specialties. Obstetrics and Gynecology (Ob/Gyn) had the biggest increases, up 46% from 2021 and 19.2% from 2020. Primary Care was the only specialty to see a decrease compared to prior years, with the metric down -15.5% from 2020.

By region, April annualized Investment per Physician FTE increased for physician practices nationwide compared to 2021 and rose for all but the Midwest (-8.1%) versus 2020. The West had the biggest increases, with the metric up 37.8% versus 2021 and 22.7% versus 2020.

Physician expenses remained on the rise, as the ongoing effects of inflation, supply chain issues, and nationwide workforce shortages take a toll. April annualized median Total Direct Expense per Physician FTE (including advanced practice providers) was $942,951, up 8.6% versus $868,465 in 2021 and up 17.7% compared to $801,105 in 2020.

Physician productivity continued to rise in April, indicating an increase in patient volumes. The annualized median Physician work Relative Value Units (wRVUs) per FTE for the month were 6,320.15. The metric was up 11.5% versus 2021 and 28.6% compared to 2020.

Physician revenues also continued to rise with higher levels of physician productivity and increased patient demand. The median annualized Net Revenue per Physician FTE (including advanced practice providers) for April was $641,408. That represents an increase of 3.6% compared to 2021 and an increase of 20.3% compared to $533,268 in 2020.

The metric rose for all specialties compared to both 2021 and 2020, with Hospital-based Specialties seeing the biggest increases at 9.1% and 19.8%, respectively.

Net Revenue per Physician FTE increased for physician practices in all regions compared to 2020 and for four of five regions versus 2021. The Great Plains was the only region to see a slight decrease for the metric at -0.2% compared to 2021.

Staffing Levels Up from 2021

The Road Ahead for Healthcare

As a result, hospitals, health systems, and other healthcare providers continue to see margin declines and investments needed to support insufficient physician practice revenues remain on the rise. Healthcare leaders must take decisive actions to contain the impacts of these trends. They need reliable data and analytics to assess current trends, anticipate future challenges, and make informed strategic decisions to set their organizations on a path toward greater financial stability.

Source: Syntellis’ Axiom™ Comparative Analytics, which offers access to real-time data drawn from more than 135,000 physicians from over 10,000 practices and 139 specialty categories, and from 500+ unique departments across more than 1,000 hospitals. Powered by Syntellis IQ, Comparative Analytics also provides data and comparisons specific to a single organization for visibility into how their market is evolving.